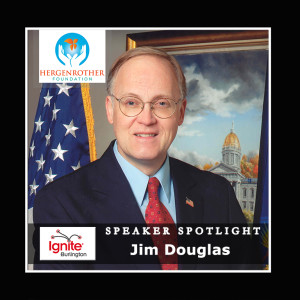 Presentation:  Can Vermont be Saved?

The former Governor was elected Secretary of State in 1980, a post he would hold for 12 years.  He was elected State Treasurer in 1994, where he served the people of Vermont for eight years. Under his leadership Vermont’s bond rating came to be the best in New England and one of the highest in the nation.

Douglas successfully sought the office of Governor in 2002 and was re-elected in 2004, 2006 and 2008.  During his tenure, he focused on strengthening the state’s economy, reducing the cost of living in Vermont and protecting the state’s natural environment.  He advanced groundbreaking health reforms that have made Vermont a model among the states in health care.  He worked to strengthen the relationship between Vermont and Quebec and the other Canadian provinces.

Governor Douglas is now an Executive in Residence at Middlebury College.  He serves on the boards of several local companies and on the Governors Advisory Council of the Bipartisan Policy Center in Washington. He continues as Town Moderator for Middlebury, a post he has held for a quarter-century. The former governor and his wife, Dorothy, have two sons and two grandsons.