If you missed Ignite Burlington 2014, you can now catch up on all the speaker action! Check out the videos below and let us know what you think!

Mike Smith | How Navy SEAL Training Turned My Life Around

Taraleigh Weathers, The Music Scene’s Life Coach | How to Rock Your Life After Loss

We are now interviewing speakers for Ignite Burlington 2015!

If you would like to nominate yourself or someone you know as an Ignite Burlington speaker, please email hallie@adamhergenrother.com

Early bird tickets will be available starting March 1st for $15.

Mary launched an ambitious energy vision to provide low carbon, low cost and reliable power to Vermonters. As a result, the company has built Vermont’s largest wind farm, is building New England’s Solar Capital in Rutland Vermont and has installed smart grid technology across the entire utility infrastructure.  In 2012, Mary led an acquisition of Central Vermont Public Service, with a promise to generate $144 million in savings for customers. GMP has grown from serving 88,000 customers in 2008 to serving well over 260,000 customers, with revenues of more than $640 million and $1.3 billion in assets.

Colin Ryan | Motivational Speaker & Stand-Up Comedian at ColinRyanSpeaks.com
Colin Ryan is a stand-up comedian who speaks to students and adults about money, confidence and happiness, and offers trainings on public speaking. Colin was named one of the top 10 youth presenters in the nation, and to date has spoken to over 50,000 students and adults. He works with schools, corporations and nonprofits across the country.

Ted Kessler | Executive Director, Founder, & Lifetime Board Member of Camp Ta-Kum-Ta
Theodore J. Kessler was born in New Jersey, the only son of parents Reverend Theodore and Angeline Kessler.  He was raised in Pennsylvania and enlisted in the United States Navy upon graduation.  Ted served four years in the Navy, most time served on the USS Intrepid where he was in charge of launching aircraft.  Upon discharge he made a move to Vermont where he purchased an insurance agency and ran that business for nine years before changing careers and purchasing Boulevard Gardens Floral and Landscaping in 1981.

Ted’s love for God, family and children inspired him to establish a camp for children with cancer, Vermont’s Camp Ta-Kum-Ta, after his son was diagnosed with cancer at the age of four.  Through his research and with support from an all volunteer board of directors he developed the concept for this camp, worked on the essential fundraising responsibilities, and Ta-Kum-Ta was born in 1984.

Ted has been involved with adult and youth programs, giving of his time through coaching baseball, basketball, serving on the board of directors for his church, on several church committees, and as treasurer. Ted served as Director of the Cursillo Program through the Catholic Church at Dannemora State Prison where he befriended and counseled inmates.  Ted has been recognized for his community involvement with the Anchor Award presented by the So.Burlington Knights of Columbus for outstanding community service; the It Takes A Village Award from the Festival of Families; the E-Town Award in 1995, at the One World One Heart Festival; the Spirit of C.O.C.A. Award in 2006, and was honored with a Joint House Resolution by the State of Vermont for his work with children afflicted with cancer.  Ted Kessler has been involved with The Children’s Oncology Camping Association International for 19 years serving as treasurer and as president of the organization.

Aside from time with his family, Ted’s most valued time is spent speaking about his beloved Camp Ta-Kum-Ta.  After 30 years, and after having sadly mourned the loss of 60 TKT family members, he continues spending countless hours organizing and fundraising and serves as the Executive Director of Vermont’s CampTa-Kum-Ta.

Danielle Livellara | Money & Business Coach at Livellara International, LLC
Danielle’s passion is helping people feel really great about their relationship to money, so they are free to follow THEIR passion.

Danielle has been working with her clients and their money for 9 years, first as a Financial Advisor with Smith Barney (now Morgan Stanley Smith Barney) and now as a money and business coach. Danielle is no longer managing investments, but managing the energy and emotions around money.

Danielle is the the co-creator of “Heal Your Wallet”, which is a 5 step online home study course that will shift you into the positive with your relationship to money.  She also teaches about money at conferences and to corporations, including speaking at the Women Business Owners Network, Senator Leahy’s Women’s Economic Opportunity Conference, Rotary Club, Vermont Energy Investment Corp., Dealer.com, and internationally at the Ultimate Girl’s Getaway. In addition, Danielle has appeared in Women’s Health magazine and been published internationally in the Gulf News of Dubai.

For fun, she loves to salsa dance, sing blues and folks (and some karaoke!), travel to warmer places, work on her Italian, paddle board, kayak, bike ride, and read endless books on love, consciousness and money.

Ryan Esbjerg | Founder of Flex Your Face
Life presents challenges to us all. It was only when Ryan worked through some personal darkness that the birth of Flex Your Face was initiated. When Ryan simplified his life and got back to the root of what makes him happy – mentally, physically and spiritually – his days got better. Ryan lives and breathes positivity. With the unending goal to inspire through simplicity, Ryan is excited to spread the Flex Your Face mission every single day.

Patrick Standen | President & Founder of Northeast Disabled Athletic Association
Patrick Standen, 50, a native Vermonter teaches philosophy at Saint Michael’s College and medical, clinical and healthcare ethics at the University Vermont. At Saint Michael’s he is an academic mentor to the men’s hockey team and advises the student philosophy club. He is the founder and board President of the Northeast Disabled Athletic Association, a 501 c 3 non-profit organization that provides athletes with physical disabilities competitive and recreational sporting opportunities. He serves as the co-chair on the Burlington Mayor’s Advisory Committee on Accessibility and on the Vermont Governor’s Council for Physical Fitness and Sports. A writer and poet, he is an avid outdoorsmen and athlete recently capturing the gold medal in sit-ski biathlon in the 2013 Empire State Games and 1st place in the 2013 KeyBank Vermont City Marathon. He lives with his wife in Burlington, VT. He also enjoys swimming, sailing, sled hockey, handcycling, skiing, kayaking and trap and skeet shooting.

Kris Gruen | Owner of Kris Gruen Music & Director of WGDR, Goddard College Community Radio
Kris Gruen writes songs about grown up life infused with a mystic wonder, softening the world’s sharp edges like a glass of exceptionally fine bourbon. Building off the success of his critically acclaimed albums Lullaby School and Part Of It All, Kris released his new album, New Comics From The Wooded World, in the summer of 2013. On past tours, Kris has shared the stage with Sean Lennon, The Avett Brothers, Belle & Sebastian, Alejandro Escovedo, Jesse Malin, Nicole Atkins, Anais Mitchell, and more.

As the full-time Director Of WGDR, Goddard College Community Radio, Gruen truly defies the typical lifestyle of the professional musician, balancing an international music career with a full-time, upper level management position in higher education. Since his start at the college, Gruen has guided the forty year-old college/community station to new levels of external recognition, financial stability and academic relevance for its licensee.

Kris lives with his wife and two daughters on a family farm nestled deep in the beautiful Worcester range of Central Vermont.

Mike Smith | Private & Public Sector Consultant
Until just recently, Mike Smith was the Vermont State President of FairPoint Communications. Mike led the company’s successful regulatory reform efforts in Vermont, which enabled the company to compete on a more level playing field and respond to the needs of the customers. He provided focused leadership to the Vermont operations, from the company’s reorganization to the nearly $80 million in broadband build out across the state that has connected 90 percent of FairPoint’s Vermont markets with high-speed internet.  Mike also led the company’s national corporate communications efforts.

Taraleigh Weathers | The Music Scene’s Life Coach
Taraleigh is the music scene’s life coach, an author and a retreat producer. She works with people in the music scene from the fans to the musicians to the managers to bring the feelings they experience from music into their everyday lives. She’s your all-access pass to a joyful and abundant life.

Taraleigh’s book, How to Become a Joy Addict: The 12 Step Program, is slated for release in late November. In the meantime you can enjoy reading Taraleigh’s words in The Huffington Post, MindBodyGreen, and on her blog located at taraleighlovesyou.com.

Ignite is an exciting, unconventional event, designed to inspire, educate, and entertain the greater Burlington community.  Ignite events are held in over 100 cities worldwide and are similar to TED’s ”Ideas Worth Spreading.” Ignite events bring people together in an inspiring, mastermind-like forum, where speakers share their passion projects and inspirational success stories for compelling five minutes, respecting Ignite’s acclaimed mantra, ”Enlighten Us, But Make It Quick.” Click here for more information: www.hergenrotherfoundation.org/events.

Registration and networking from 4:45pm-6:00pm.  Light appetizers and a cash bar will be available.  Presentations begin promptly at 6:00pm.

Tickets are extremely limited and are on sale now for $25.00.  For more information and to purchase tickets, visit http://goo.gl/zYoevN.

Hergenrother Foundation was created by Adam Hergenrother, a native of Colchester, VT, to empower today’s youth to become outstanding members of their communities. Through leadership camps, leadership seminars, inspirational community events, and mentorship programs, Hergenrother Foundation will provide our area’s youth with the necessary resources, programs, and events to grow into confident and dynamic leaders.  For more information, visit www.hergenrotherfoundation.org. 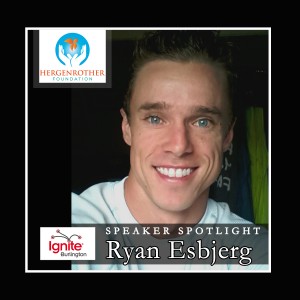 Presentation:  What Makes You… Flex Your Face?

Life presents challenges to us all. It was only when Ryan worked through some personal darkness that the birth of Flex Your Face was initiated. When Ryan simplified his life and got back to the root of what makes him happy – mentally, physically and spiritually – his days got better. Ryan lives and breathes positivity. With the unending goal to inspire through simplicity, Ryan is excited to spread the Flex Your Face mission every single day.